The Android Open Source Project maintains a complete software stack intended to be ported by OEMs and other device implementors to run on actual hardware. Accordingly, we maintain a number of "code lines" to clearly separate the current stable version of Android from unstable experimental work.

The chart below depicts at a conceptual level how AOSP manages code and releases. We're referring to these as "code lines" instead of "branches" simply because at any given moment there may be more than one branch extant for a given "code line". For instance, when a release is cut, sometimes that will become a new branch in git, and sometimes not, based on the needs of the moment. 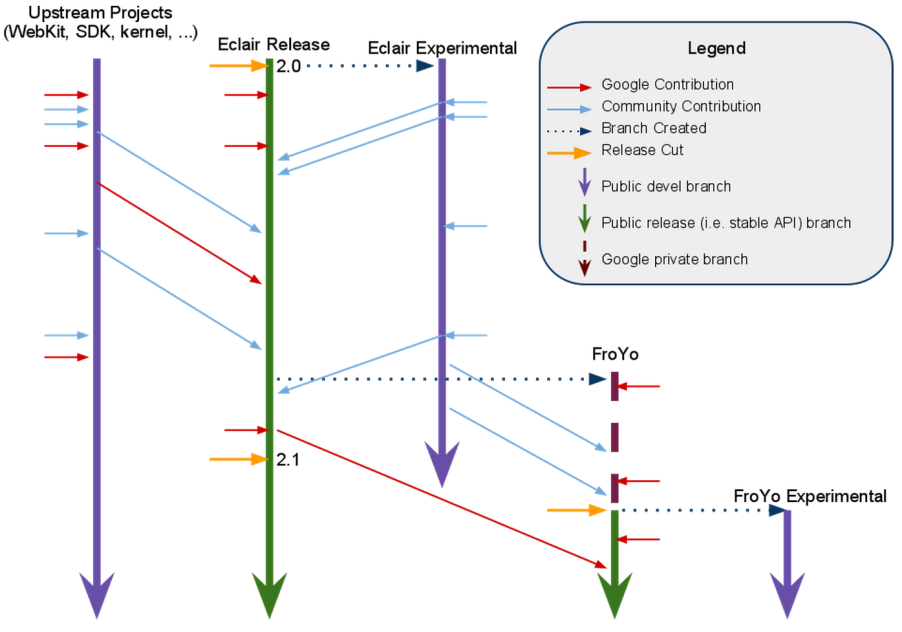 The source management strategy above includes a code-line that Google will keep private. The reason for this is to focus attention on the current public version of Android.

OEMs and other device builders naturally want to ship devices with the latest version of Android. Similarly, application developers don't want to deal with more extant platform versions than strictly necessary. Meanwhile, Google retains responsibility for the strategic direction of Android as a platform and a product. Our approach is based on focusing on a small number of flagship devices to drive features, and secure protections of Android-related intellectual property.

As a result, Google frequently has possession of confidential information of third parties, and we must refrain from revealing sensitive features until we've secured the appropriate protections. Meanwhile, there are real risks to the platform arising from having too many platform versions extant at once. For these reasons, we have structured the open-source project -- including third-party contributions -- to focus on the currently-public stable version of Android. "Deep development" on the next version of the platform will happen in private, until it's ready to become an official release.

We recognize that many contributors will disagree with this approach. We respect that others may have a different point of view; however, this is the approach that we feel is best, and the one we've chosen to implement.