To work with the Android code, you will need to use both Git and Repo.

One of the challenges in setting up the Android project was figuring out how to best support the outside community--from the hobbiest community to large OEMs building mass-market consumer devices. We wanted components to be replaceable, and we wanted interesting components to be able to grow a life of their own outside of Android. We first chose a distributed revision control system, then further narrowed it down to Git.

In most situations, you can use Git instead of Repo, or mix Repo and Git commands to form complex commands. Using Repo for basic across-network operations will make your work much simpler, however.

The task list below shows a summary of how to do common Repo and Git tasks. For complete quick-start information and examples, see Get source .

To synchronize the files for all available projects:
$ repo sync

Why use topic branches?

Start a topic branch in your local work environment whenever you begin a change, for example when you begin work on a bug or new feature.

A topic branch is not a copy of the original files; it is a pointer to a particular commit. This makes creating local branches and switching among them a light-weight operation. By using branches, you canisolateone aspect of your work from the others. For an interesting article about using topic branches, see Separating topic branches .

To verify that your new branch was created:
$ repo status

To assign the branch to a particular project:
$ repo start branch name project

To switch back and forth among branches that you have created in your local work environment:
$ git checkout branchname

To see a list of existing branches:
$ git branch
or...
$ repo branches

The name of the current branch will be preceded by an asterisk.

Note:
A bug might be causing repo sync to reset the local topic branch. If git branch shows * (no branch) after you run repo sync, then run git checkoutagain.

To list the state of your files:
$ repo status

Therepo diffcommand shows every local edit that you have made that would not go into the commit, if you were to commit right now.

To see every edit that would go into the commit if you were to commit right now, you need a Git command, git diff. Before running it, be sure you are down in the project directory:
$ cd ~/workingdirectory /project
$ git diff --cached


Cleaning up your client files

To update your local working directory after changes are merged in Gerrit:
$repo sync

Deleting a client will permanently delete any changes you have not yet uploaded for review.Becauseall state information is stored in your client, you only need to delete the directory from your filesystem:

You can use Repo to run the same program across all projects:

The -c argument is evaluated through /bin/sh and any arguments after it are passed through as shell positional parameters.

Optional elements are shown in brackets[ ]. Once Repo is installed, you can get information about any command by running
repo help command

Installs Repo in the current directory. This creates a .repo/ directory that contains Git repositories for the Repo source code and the standard Android manifest files. The .repo/ directory also containsmanifest.xml, which is a symlink to the selected manifest in the .repo/manifests/ directory.

The -u argument specifies a URL from which to retrieve a manifest repository. For example:
$ repo init -u git://android.git.kernel.org/platform/manifest.git

To select a manifest file within the repository, use the -m option. (If no manifest name is selected, the default is default.xml.)For example:
$ repo init -u git://android.git.kernel.org/platform/manifest.git-m dalkvik-plus.xml

To specify a revision, that is, a particular manifest-branch, use the -b option. For example:
$ repo init -u git://android.git.kernel.org/platform/manifest.git-b release-1.0

Downloads new changes and updates the working files in your local environment. After a successful repo sync, the code in specified projects will be up to date with the code in the remote repository.

You can specify project-list as a list of names or a list of paths to local source directories for the projects:
repo sync [proj1 proj2 ... projN ]

If you run repo sync without any arguments, it will synchronize the files for all the projects.

When you run repo sync, this is what happens:
The repo sync command also updates the private repositories in the .repo/ directory.

For the specified projects, Repo compares the local branches to the remote branches updated during the last repo sync. Repo will prompt you to select one or more of the branches that have not yet been uploaded for review.

After you select one or more branches, all commits on the selected branches are transmitted to Gerrit over an SSH connection.You will need to configure an SSH key to enable upload authorization.Visit SSH Keys within the user settings panel to register your public keys with Gerrit.To enable password-less uploads, consider using ssh-agent on your client system.

When Gerrit receives the object data over its SSH server, it will turn each commit into a change so that reviewers can comment on each commit individually.

To combine several "checkpoint" commits together into a single commit, use git rebase -i before you run repo upload.

You can specify project-list as a list of names or a list of paths to local source directories for the projects:
repo upload [proj1 proj2 ... projN ]

If you run repo upload without any arguments, it will search all the projects for changes to upload.

To make edits to changes after they have been uploaded, you should use a tool likegit rebase -ior git commit --amend to update your local commits.

After the upload is complete the changes will have an additional Patch Set (e.g. Patch Set 2, Patch Set 3, ...).

You can specify project-list as a list of names or a list of paths to local source directories for the projects:
repo diff [proj1 proj2 ... projN ]

Note: As of Jan. 26, 2009, there is a mirroring lag of approximately 5 minutes between when a change is visible on the web in Gerrit and when repo download will be able to find it, because changes are actually downloaded off the git://android.git.kernel.org/ mirror farm. There will always be a slight mirroring lag as Gerrit pushes newly uploaded changes out to the mirror farm.

Runs a shell command in each project.

Displays detailed help about a command.

You can specify project-list as a list of names or a list of paths to local source directories for the projects:
repo prune [proj1 proj2 ... projN ]

Starts a new branch for development.

The newbranchname argument should provide a short description of the change you are trying to make to the projects.If you don't know, consider using the name default.

The project-list specifies which projects will participate in this topic branch. You can specify project-list as a list of names or a list of paths to local working directories for the projects:
repo start default [proj1 proj2 ... projN ]

"." is a useful shorthand for the project in the current working directory.

Shows the status of the current working directory. You can specify project-list as a list of names or a list of paths to local source directories for the projects:
repo status [proj1 proj2 ... projN ]

To see the status for only the current branch, run
repo status .

The status information will be listed by project. For each file in the project, a two-letter code is used:

For example, if you edit the file main.py within the appeng project without staging the changes, then repo status might show

If you go on to stage the changes to main.py by running git add, then repo status might show

If you then make further edits to the already-staged main.py and make edits to another file within the project, app.yaml, then repo status might show

Click on the cheatsheet to open it in a new window for easier printing. 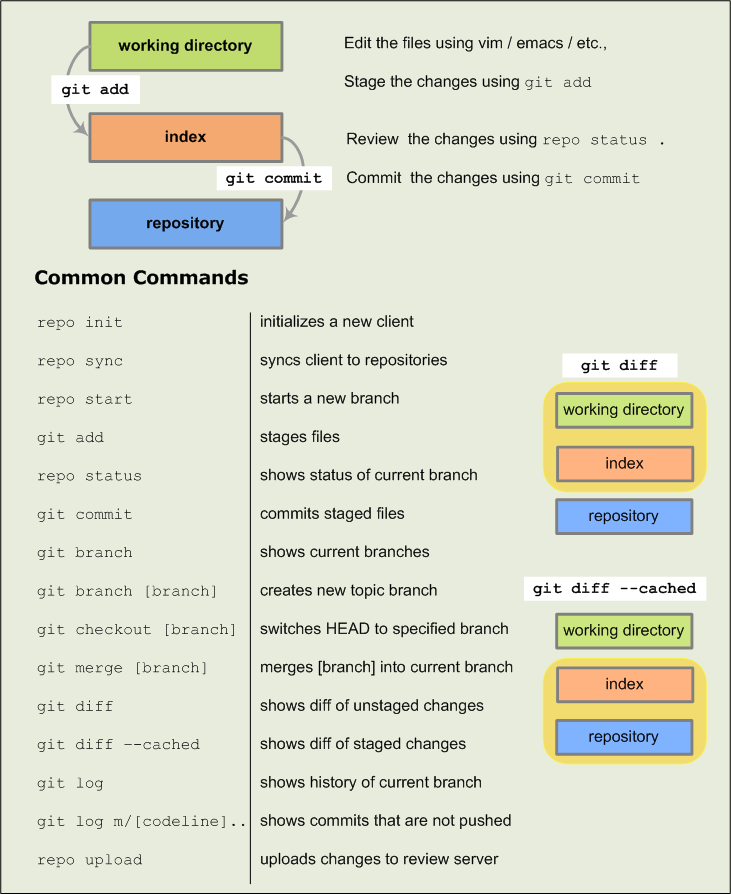 Staged changes
Changes marked by git add for inclusion in the next commit's snapshot.

Commit
At intervals, you use git commit to save a snapshot of the staged files and a log message that describes the change.